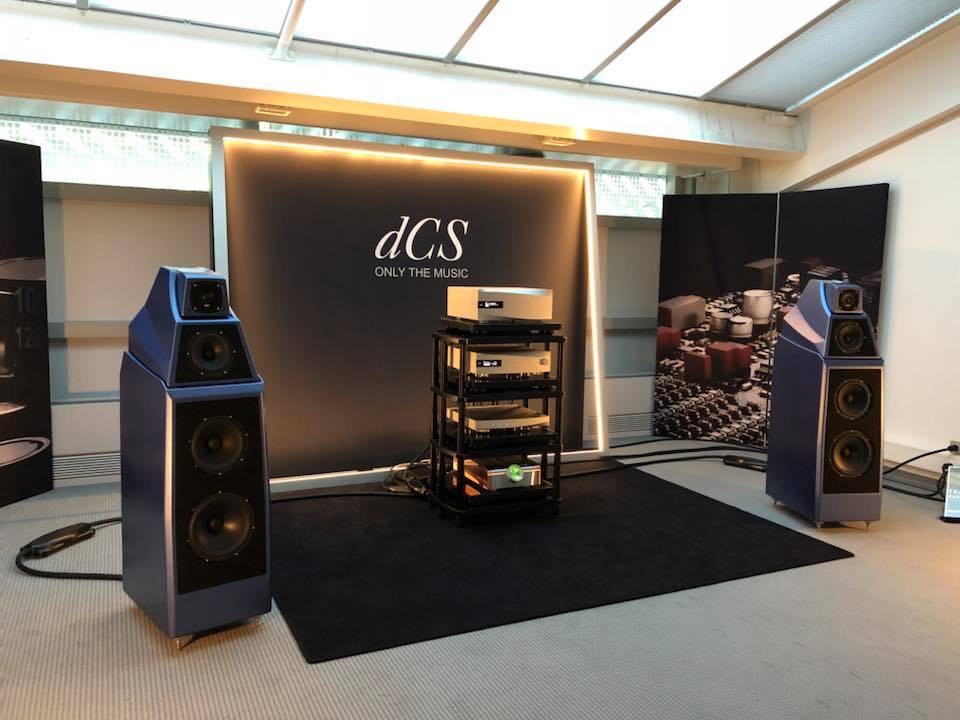 The Munich High End Show is the hi-fi show that all the others want to be. In the space of thirty seven years, it has grown from a group of hobbyists – Germany’s High End Society – to a large scale international event. For the past fifteen years it has been held in Munich at the large, spacious and very congenial M.O.C. exhibition centre. The HIGH END 2018 show took place from the 10th to the 13th of May – and of course, dCS was there…

The great attraction of this show is that – unlike so many other hi-fi events around the world – it is not held in a crowded, crammed hotel. Instead, the M.O.C. is a proper, purpose-designed exhibition space. Also, it takes place in the beautiful city of Munich – the jewel in Bavaria’s crown. It’s a picture-postcard German city – a tasteful mixture of classical and modern architecture, it is clean, orderly, efficient and polite. There’s great shopping, superb dining and the hotels range from good to excellent. What’s not to like?

The M.O.C. building is large, spacious and easily accessible, with a lovely outside courtyard food and beer garden at its heart. The show gets more crowded every year – with a large contingent of visitors now coming from the Far East. Yet still it’s possible to walk around and see what you want without endless queueing or the feeling of being crammed into rooms like sardines in a tin. The dCS room is traditionally up in one of the atriums – large by hi-fi show standards, it’s able to accommodate a serious sound system with which visitors can hear what a dCS front end is really capable of.

This year, a Dan D’Agostino Momentum stereo power amplifier and a pair of Wilson Audio Alexia 2 loudspeakers were pressed into service. This was driven by a dCS Rossini DAC and Rossini Clock, fed by the new Rossini SACD/CD transport. A range of music was played throughout the show, including recordings made by Wilson Audio’s Peter McGrath. Some of these had been Master Quality Authenticated-encoded, and visitors were able to make direct A-B comparisons of the original recordings and their MQA equivalents. dCS also took part in an MQA livestream of six-piece London-based band Misha Mullov-Abbado, streamed direct to Munich from Miloco Studios in the UK’s capital city.

This is the great thing about hi-fi shows. Of course they’re relatively noisy environments, and no manufacturer is ever truly happy with the sound they achieve with the imperfect acoustics of their show space. Yet it’s possible to walk into a room and hear something that no amount of words on a page can describe. The dCS room gave one of the clearest and most immersive sounds of the show. Of course, given the calibre of both the equipment and source materials, anything less would have been a disappointment!

The muscular D’Agostino amplifier served up vast amounts of clean power, which in turn produced great results from Wilson’s big Alexia 2 loudspeakers; they delivered a strong central image with excellent stage depth. The system was able to reproduce the three dimensional recorded acoustic of an original musical event faithfully, and the room was large enough to let the speakers supply extended bass. Although the varying number of people present in the room actually changed the tonal balance slightly, the system always sounded highly realistic. The dCS Rossini is an excellent DAC, offering much of the flagship Vivaldi’s performance despite being dramatically less expensive. Although it doesn’t have the forensic clarity of the top dCS digital front end, it is still extremely revealing and one of the finest ways to make meaningful comparisons between recordings.

It was an exhilarating week for dCS. The logistics of setting up one of the finest sounding rooms – and indeed systems – of the show were formidable. Yet there was a profound feeling of satisfaction when all was said and done. The MQA livestream was a great crowd puller, while the MQA file comparisons fascinated many visitors who heard them. Yet the Rossini’s sheer breadth of capabilities meant that it also wowed people with its superb silver disc sound, as well as its ability to stream a wide variety of music via its built-in Tidal functionality, and play hi-res music from USB memory sticks. If you ever get the chance to visit Munich one May, make your way to this seriously special show and hear the difference for yourself.