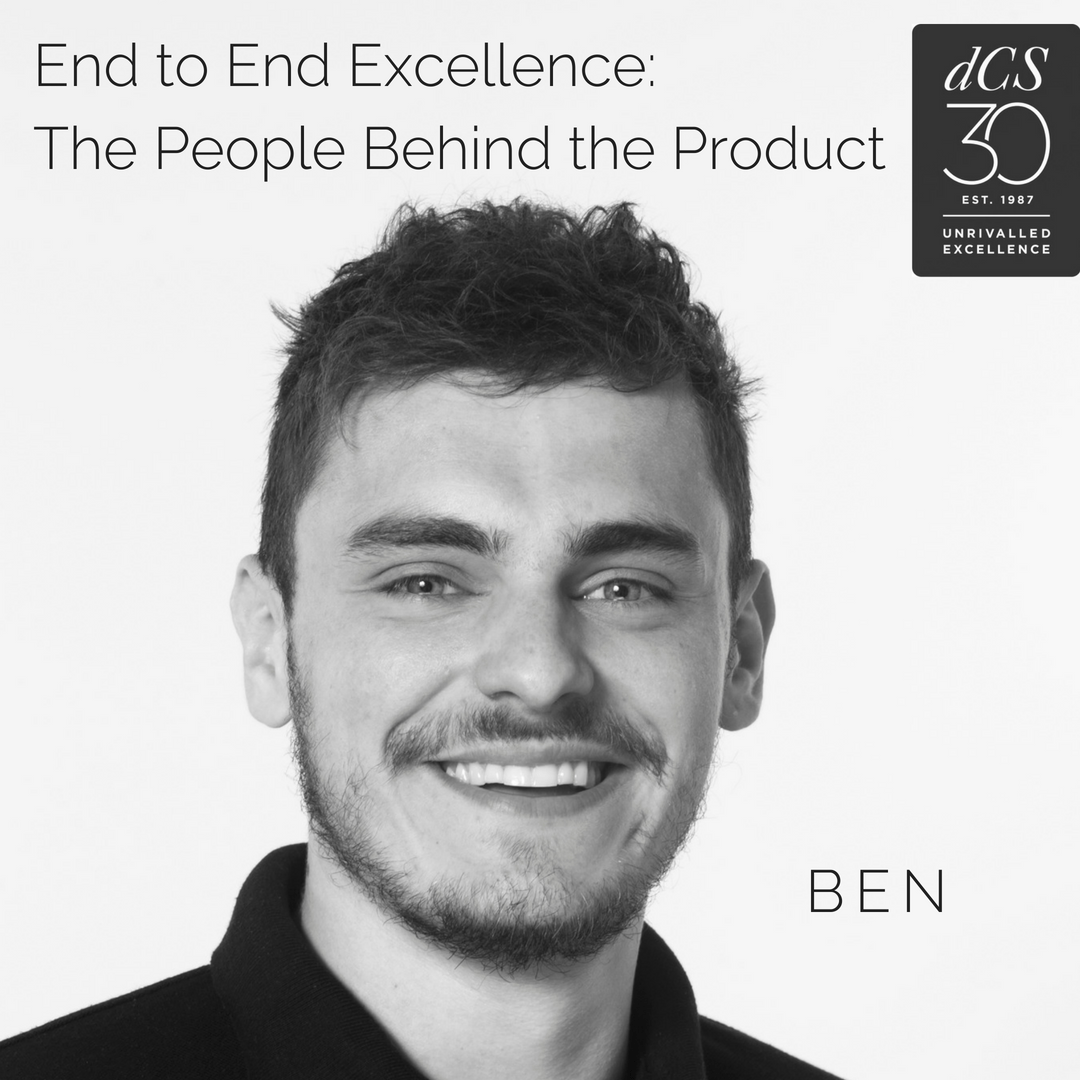 “I am massively grateful for my opportunity”, says Ben Ashcroft. “Some people say that they hate their job, but I just wouldn’t know what that feels like. I’m genuinely content at dCS. I joined as a Production Technician, putting units together, getting it out of the door, learning the new products inside out as I did my apprenticeship. But from the start of this year I am now a Service Technician. I’m working with another technician and learning from him the ins and outs of the products themselves. If faults do occur then I fix them, which is a great learning process for me.”

Ben admits that he “fell on his feet” with his job at dCS – something he hopes and intends to make a career of. He says that he was in the right place at the right time to get hired by the Cambridge company, and isn’t looking that gift horse in the mouth. “I don’t take it for granted. That’s why, when I go to college on day release from the company, I don’t just settle for passes – I do my absolute best. I fully appreciate the extent of the opportunity I’ve got here, and because it’s a relatively small company everything that you do is noticed. I really like that. If I had a job elsewhere then I would be more of a number than a person; I might have just settled for passes because no one would really notice. But at dCS I get a lot of encouragement from my peers, and that’s great.”

Ben remembers his first interview. “I went in and openly said that I have no experience in engineering, and that all I can tell you is that I’m a blank page, I’ve got a good work ethic and I am willing to learn and to grow into any role you desire of me. They must have believed in me and trusted me, otherwise I wouldn’t be here talking to you. I explained that I was massively into music, and everyone who works here is too – I think they could see that I would fit in. It’s a pretty tight knit group of people here with – at the very least – one shared interest!”

Unlike some staff who have travelled from far and wide to work at dCS, Ben is a local guy. He followed a pretty typical path through school, although did very well. “My first full time job was at Sainsburys, something I continued with for a few years while I grew up. I’ve always been very academic, but also very sporty. I used to play football a lot, but got increasingly into music and technology. I started off liking indie bands but started getting into techno around the age of eighteen. It was initially stuff like dubstep and drum’n’bass, but nowadays it’s broadened to the whole spectrum. So, I do DJ-ing and create music myself too. I am so picky, I am very clued up on a lot of it.”

With his love of electronic music, he’s almost in a gang of one at dCS. “No one here shares my music taste I’m afraid, so trying to explain why I love it so much is hard because no one ever really agrees with me. Some people say it’s really repetitive and there is nothing to it. Perhaps I listen differently – I have got an ear for rhythm – it’s hard to describe. When you listen to electronic music it is little tiny details and the intricate things that people put in that just sound incredible, there’s a lot more to it than many think. It’s really layered, and introspective. Still, I am open to music like jazz and enjoy it.”

Don’t ask him to name his favourite artist, for there are so many. He was quite uncomfortable giving just one example because he’s so intense about it. “Well – Floating Points, Four Tet, Bicep – but there’s so much more”, he says. “Many of the people who buy dCS equipment probably won’t listen to the same things as me. But I guess it adds an extra dimension, and this type of music does sound great on our products! I also love making it, and going out to listen in clubs in the early hours at weekends. My friends and I know the DJs we’re going to listen to, we know the music to expect, we’re always on Shazam trying to recognise tracks, things like that. It is all just part of the culture, so to speak…”

Back on to the subject of his career, and Ben elaborates. “I had a good time at Sainsburys, and got recognised for my work ethic. But then it dawned on me that it wasn’t what I wanted to do forever, so I searched for engineering jobs. When dCS offered me my position here I did a three-year apprenticeship in electronic engineering, and passed with the best grade. I’m now doing my Level 4 HNC on day release, which is another two years. I’ve not dropped any marks, I’m smashing it basically! When I was at Sainsburys I enjoyed the customer-facing side and going forward that’s something I hope to be doing at dCS. I went to Norway at the end of last year to perform an upgrade for one of our customers, and it went really well – the job was done perfectly and the guy was really happy. It was incredibly satisfying.”

Ben’s definitely a ‘glass half full’ kind of person, with an irrepressible optimism about life and his future in a company he loves. It seems to have reflected back on him, because dCS Managing Director David Steven has been very supportive and given him a lot of freedom to go his own way. “They are never going to hold me back in that respect, I am always grateful for that”, he adds. Meanwhile, he’s just taking in everything he can from his colleagues. “Just because I get good grades doesn’t mean I’m actually good at anything. Actually I’m lucky because I work with so many experienced people, learn a lot from everyone and am always respectful to them. It’s a great place to get trained up – a kind of masterclass, really!”