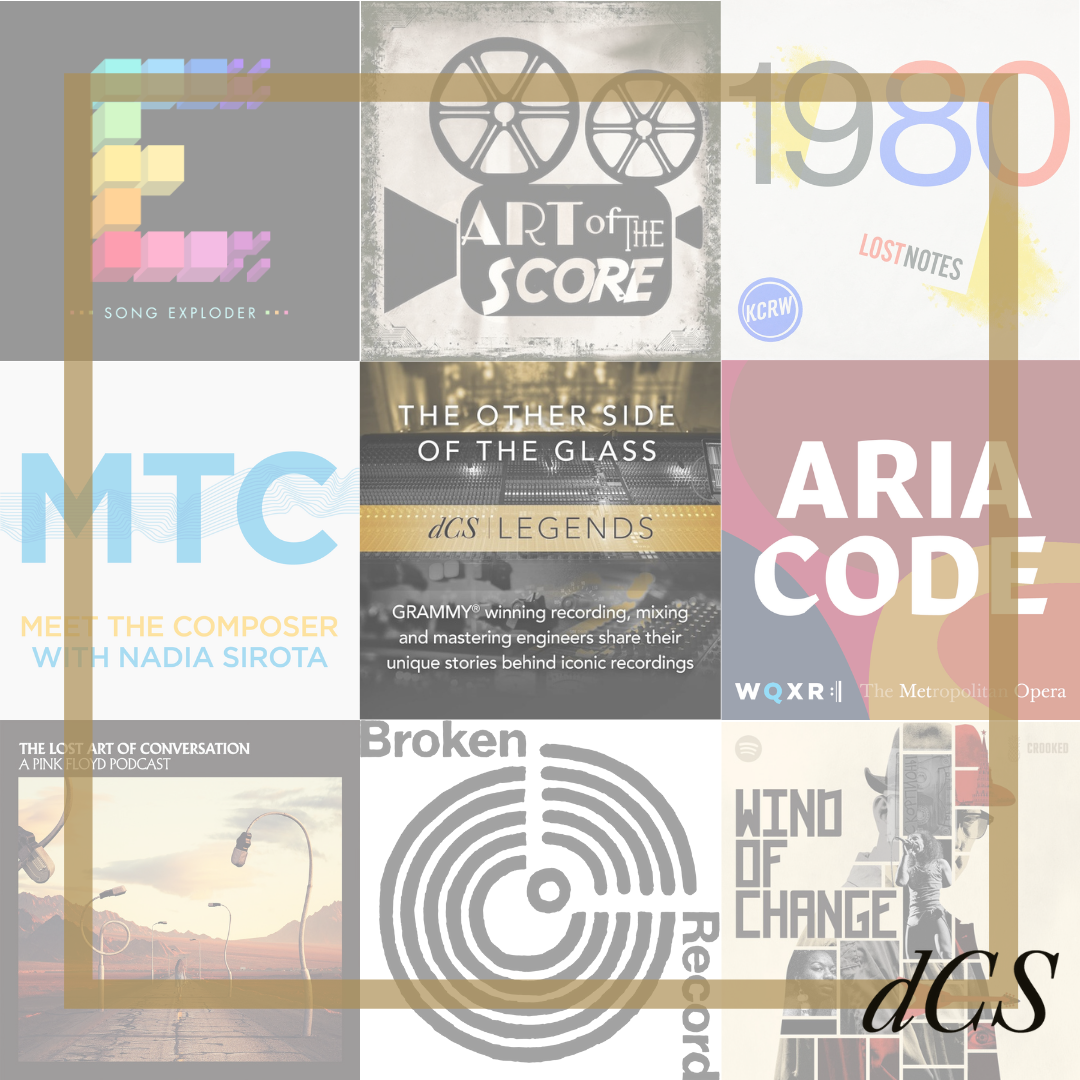 Whether you’re looking for in-depth interviews, critical analysis or commentary on the latest releases, there’s a wealth of great music podcasts to choose from online. Here, we take a look at some of our favourite shows to date – from revealing documentaries to series exploring artists’ creative process

For music fans, the rise of podcasts has provided a whole new way to discover new releases and learn more about the stories behind popular recordings. The number of music-related shows has exploded in the past few years, with labels, artists and journalists using the medium to discuss and reflect on a wide range of music and genres.

At dCS, we recently teamed up with journalist Simon Barnett to create our first podcast series, dCS Legends: The Other Side of the Glass. Launched as part of our dCS Legends programme, which celebrates outstanding work in music production, it features exclusive interviews with 11 of the world’s top recording, mixing and mastering engineers about their work, process and the making of GRAMMY-winning recordings.

Making the series was a fascinating process, and we’ve been delighted to see so many of our friends and partners tuning in to listen. You can find the full series over at dcslegends.com – and for more music stories, check out our selection of new and ongoing podcasts below.

Launched in 2014, Hrishikesh Hirway’s series has become one of the most popular music podcasts of all time. The show has built a devoted global following and its creator recently teamed up with Netflix to make a miniseries of the same name.

The format is simple: in each episode, a musician breaks down one of their tracks and tells the story of how it was made, charting its evolution and the thinking or ideas behind it. The result is a fascinating series that delves into artists’ creative process and the careful consideration that goes into making a hit track.

Featuring interviews with FKA twigs, Fleetwood Mac, The Cranberries, Billie Eilish, Tame Impala, Kelly Lee Owens and many more, it covers a wide range of music, and will give you a whole new perspective on songs you might have heard countless times.

Described as “a collection of the greatest music stories never told”, public radio station KCRW’s documentary series brings together an intriguing collection of tales from music’s past.

Season 1 features episodes on Captain Beefheart, cult rock band The Shaggs and WBAD (a pirate radio station which earned a devoted following among New York hip-hop fans in the mid 90s), while season 2’s highlights include a look at the work of pioneering sound designer and synth composer Suzanne Ciani and all-female punk group Fanny, which faded into obscurity after a promising start in the music world.

The podcast’s latest series is more akin to a collection of oral essays than a documentary, with critic Hanif Abdurraqib examining a single year (1980) through the lens of albums by the likes of Grace Jones and The Sugarhill Gang. If you’re looking for lesser-told stories from the archives, or an in-depth look at key moments in a significant year in pop culture, then Lost Notes is a great place to start.

Created by New York classical radio station WQXR in partnership with the Metropolitan Opera, Aria Code brings together musicians, writers and academics to discuss some of opera’s most popular arias. Each instalment is focused on a single work, with host Rhiannon Giddens delving into the stories behind them and their lasting influence before playing an excerpt from the Metropolitan Opera’s archives. Season 1 includes a look at Mozart’s Queen of the Night, Donizetti’s Le fille du regiment and Verdi’s La traviata, among others, while season 2 examines arias by Puccini, The Gershwins, Offenbach and more. Combining friendly discussion with some powerful performances, it’s an engaging series with guest appearances from some of opera’s leading talents.

Also from WQXR, Meet the Composer is an immersive show that explores the work of contemporary classical composers, from Henry Threadgill and John Adams to Kaitlyn Aurelia Smith. The series was created by Nadia Sirota, a classical violist who has worked with David Bowie, Bjork, Arcade Fire and The National, as well as various orchestras around the world. Blending musical performances with interviews, commentary and evocative sound design, it abandons the traditional interview format in favour of a more experimental approach – one that paints a rich picture of each composer’s work and what makes it unique. With its artful production and detailed analysis, it provides an illuminating look at some of the most innovative composers of recent times.

One of the most talked-about podcasts to emerge in 2020, this eight-part series asks whether one of the biggest selling singles of all time – Wind of Change by German rock group Scorpions – was in fact written by the CIA. Hosted by journalist Patrick Radden Keefe, it investigates a rumour that America’s intelligence agency came up with the song as part of a covert Cold War-era operation to influence people through music and pop culture.

Over the course of the series, Keefe speaks with musicians, academic and ex-CIA staff in a bid to uncover the truth behind the record. The show is as much about espionage as it is about music, but it’s an interesting look at the legend behind a seemingly innocuous power ballad and the role of music and culture in driving political agendas. The show is now being adapted for TV, with Hulu currently developing a miniseries based on Keefe’s investigation.

Journalist Malcolm Gladwell teamed up with music producer Rick Rubin and Bruce Headlam, former Media Desk Editor at The New York Times, to create this eclectic podcast, which features some in-depth and thought-provoking conversations with some of the biggest names in music. Described by Gladwell as “a musical variety show”, the series combines wide-ranging interviews with live performances and excerpts from guests’ greatest hits. Guests range from David Byrne to Tyler the Creator, James Taylor and Run the Jewels, with conversations covering everything from politics to personal relationships – and of course, making records.

The Lost Art Of Conversation

The Lost Art Of Conversation was created to promote the release of Pink Floyd’s The Later Years box set, which brings together music created from 1987 to 2019. Through interviews with BBC 6 music journalist Matt Everitt, band member David Gilmour reflects on four aspects of the band’s creative output during this period, from studio recordings to live shows, artwork and unreleased material.

In the debut episode, Gilmour discusses the making of A Momentary Lapse of Reason, and the band’s desire to embrace new technologies during the making of the album. Later instalments delve into the making of their ambitious live tours and the challenges involved in bringing their creative vision to life, as well as the stories behind their now iconic album covers. For fans of Pink Floyd – or anyone interested in the group’s work – it offers an intimate and in-depth look at a significant era in their history.

Art of the Score

One for cinemaphiles, Art of the Score offers a deep dive into a collection of memorable and noteworthy film scores, including John Williams’ work for Jurassic Park and the Empire Strikes Back, Jonny Greenwood’s music for Paul Thomas Anderson’s dark drama, There Will Be Blood and John Powell’s soundtrack for family favourite How To Train Your Dragon. In each episode, hosts Andrew Pogson, Dan Golding and Nicholas Buc dissect the composition and key themes in a particular score and what makes it so powerful. Episodes are long – with some clocking in at around 90 minutes – but each one offers some insightful analysis of some poignant, uplifting, eerie and unforgettable soundtracks.