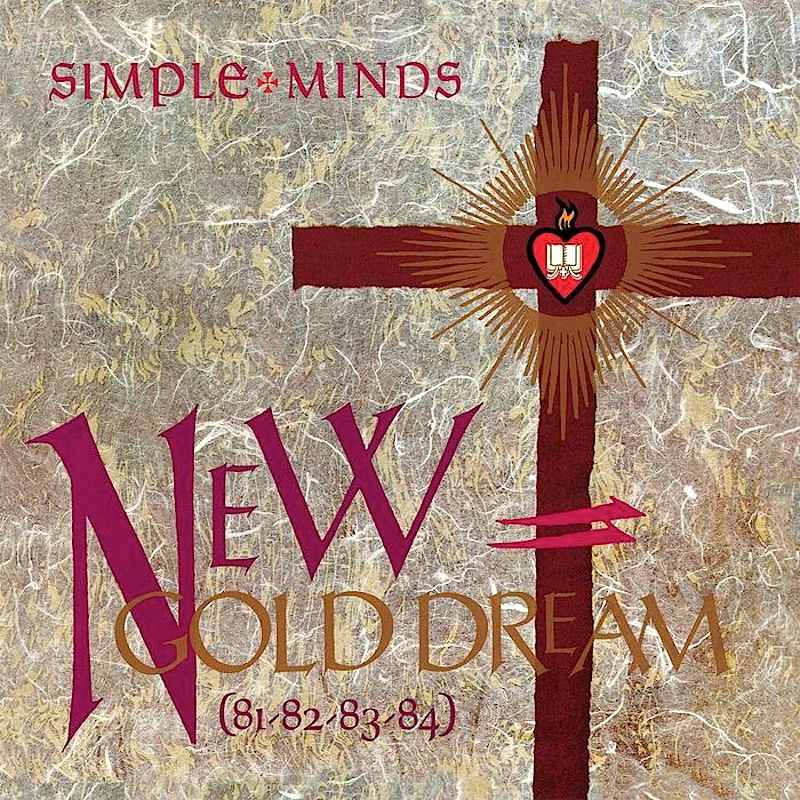 Glasgow’s Simple Minds started life as a motley crew of spotty adolescents, forging scratchy punk music under the name of Johnny and the Self Abusers. But by the time New Gold Dream was released on September 13th, 1982, they had metamorphosed – butterfly-like – into accomplished purveyors of sophisticated, cutting-edge pop.

Three years later, Simple Minds would be selling out stadiums in the USA, vying with U2 for the accolade of the biggest college band in America, shortly before REM arrived to steal the show. Yet in 1982, Jim Kerr (vocals), Charlie Burchill (guitars), Michael MacNeil (keyboards) and Derek Forbes (bass guitar) still retained a trace of their Punk roots in the directness and intensity of the sound, but it had become suffused with warmth and subtlety too.

Listen hard and you can hear traces of Low-period Bowie, early Roxy Music and feint shades of Kraftwerk – but essentially this album is the band’s own. It sounds unique, and all the better for it. Two brilliant session men also played a part – Mel Gaynor (who later became full time drummer), and Herbie Hancock who did keyboards for one of the album’s highlights, Hunter and the Hunted.

New Gold Dream blends the band’s tight, punchy New Wave sensibility with Peter Walsh’s superb production, which provides an enveloping, almost Phil Spector-like wall of sound. Having just completed the ruinously expensive and complex Penthouse and Pavement for fellow Virgin labelmates Heaven 17, he had already set his bar high. Swirling early analogue synthesisers (Roland Jupiter 4 and 8, and Oberheim OB-Xa) are layered over one another, and behind this Kerr’s steely vocals intone in a deadpan way. This contrasts with the warmth and richness of the music, and its subtle and dreamy – almost ethereal – feel.

Lyrically the album finds Jim Kerr in an optimistic state of mind. Someone, Somewhere, in Summertime kicks things off in a pensive mood (“Moments burn, slow burning golden nights, once more see city lights…”), but then the pace quickens. Back at the time of its release, the title track sounded like a manifesto for a brighter, bolder decade after the grim misery of late nineteen seventies Britain (“worldwide on the widest screen, dreaming the dream with me…”). It was a blessed relief from the world-weary cynicism of Punk.

“Every band has an album that is their holy grail,” Jim Kerr later said. “New Gold Dream was ours. It was a special time because we were really beginning to break through with that record, both commercially and critically. The people that liked that record connected with it in a special way. There was a depth to it, it created its own mythology. It stood out.”

Sonically, this dense recording sounds impenetrable through lesser hi-fi systems, but any dCS DAC slices through the mix to reveal its innately excellent sound. The original CD (Virgin V 2230) is enjoyable, but the stereo SACD released in 2003 (SACDV2230) is superlative, and 2005’s DVD-Audio (DVDAV 2230) is excellent for surround fans. Via a top notch high resolution digital converter, New Gold Dream (81-82-83-84) takes your breath away.