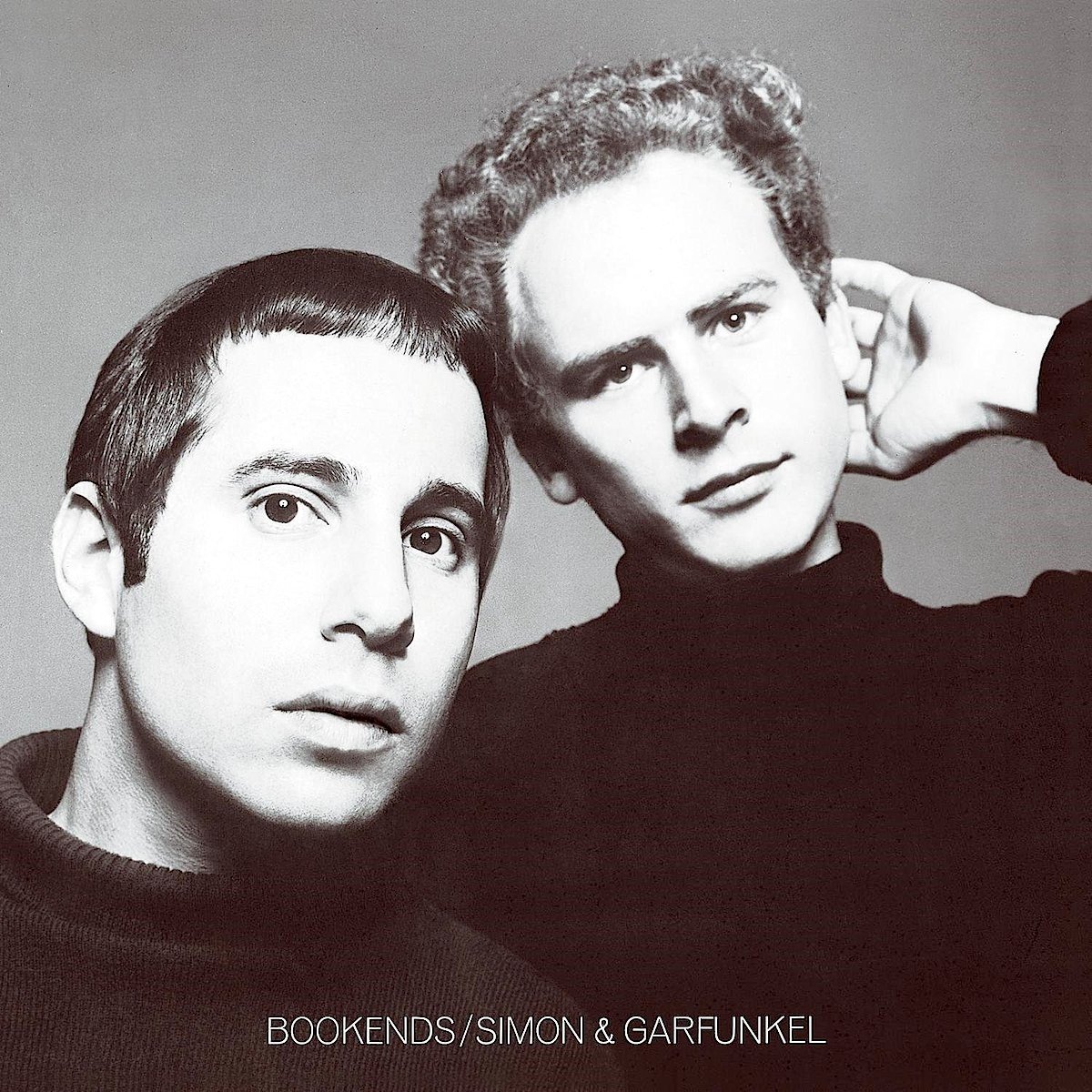 After the failure of their 1964 debut album Wednesday Morning, 3 A.M, Paul Simon and Art Garfunkel parted ways, but then their second album Sound of Silence charted in 1965 and things got back on track. By Parsley, Sage, Rosemary and Thyme (1966), the duo were cooking on gas and Simon declared they had “made it”. A string of hit singles followed, and then he burned out. Little was done for a while, and then a meeting with The Graduate director Mike Nichols took place, during which Simon agreed to write some soundtrack music for $25,000. Mrs Robinson duly became a smash hit.

Bookends was the result of going back into the studio from 1966 to 1968, bringing together assorted singles and music written for The Graduate, plus other material. A Hazy Shade of Winter, At the Zoo, Punky’s Dilemma, Overs and Mrs Robinson comprise the earlier songs, then Fakin’ It, America and Bookends Theme followed. In the later recording sessions the duo became more experimental. Paul Simon hired viola and brass players, plus additional percussionists; for the first time he took a ‘hands on’ approach to production, and there were more solo vocal tracks, rather than the harmonies that had been the duo’s hallmark. Robert Moog himself was drafted in to deliver the bassline for Save the Life of My Child on an early Moog synthesiser. Simon later said that Bookends was where he “had most use of the studio” out of all his albums with Art Garfunkel. Produced by Simon, Garfunkel and Roy Halee, Columbia’s Studios B & E in Manhattan had rarely been so busy.

In the style of The Beach Boys’ Pet Sounds and The Beatles’ Sergeant Pepper, Bookends is a concept album – its themes being in Paul Simon’s own words, “youth, alienation, life, love, disillusionment, relationships and mortality” He had told Garfunkel, “I’m going to start writing a whole side of an album – a cycle of songs. I want the early ones to be about youth and the last song to be about old age, and I want the feel of each song to fit.” His wry observations about human nature are entertaining and perceptive. Garfunkel later explained that, “we were terribly impressed with Sergeant Pepper, and that shone a light on the path that led to Bookends.” Interestingly, while the Beatles record has a bright, vibrant, colourful feel, this record – released just ten months later – is much darker, as its monochrome sleeve artwork suggests.

Bookends received great critical acclaim, elevating the duo’s status from purveyors of well-crafted but forgettable folk-pop to “rock” artists on a par with Bob Dylan. Massively successful commercially, the album was released on April 3, 1968 and produced the chart-topping single Mrs. Robinson, and then itself reached number one on both sides of the Atlantic, going double Platinum in the United States. It signalled the arrival of Paul Simon as a true creative force in popular music, with America arguably one of the finest songs of the nineteen sixties. If you can’t find the 1998 Mobile Fidelity Sound Lab (UDCD 732) Compact Disc release, then get Sony Japan’s fine-sounding 2015 reissue (SICP 4703).