Music / Album of the Month / Ralph Vaughan Williams – Symphony No.2 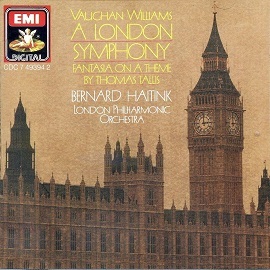 Born in the beautiful Cotswolds village of Down Ampney in Gloucestershire in 1872, the young Ralph Vaughan Williams’ father was the vicar of the local church. His family later moved to the Surrey Hills, where he was beguiled by the beauty of the English countryside. He showed early talent for music, so his mother sent him to Charterhouse School and then to the Royal College of Music. He then read History and Music at Trinity College, Cambridge, then returned to the RCM to complete his education.

By the time he died in 1958, aged 85, the prolific Vaughan Williams had nine symphonies under his baton, plus choral and shorter orchestral works such as Lark Ascending. It was A Sea Symphony that saw him reach the heights of his powers in 1913, and then came the London Symphony – his second – the following year. This rousing and evocative piece of music is widely considered his best. ‘The London’, as it has become known, walks the listener through the capital city in all its Edwardian pomp.

The opening Lento Allegro imagines the city to be waking up to a new day, slowly coming to life. Then the Lento, described by Vaughan Williams as “Bloomsbury Square on a November afternoon”, has a beautiful cor anglais set to rousing strings. The Lavender tune flows into a magnificent coda. The following movements conjure up different scenes of London, slowly moving to an imposing climax that jumps back to the first movement’s setting, as if London was returning to its slumbers.

The music is beautiful and powerful, but never becomes grandiose or self-important; it’s as if Vaughan Williams wrote it to soundtrack a visceral experience of the city, rather than trying to dramatise for effect. The range of emotions that the music conveys is wide, but the work never descends into pastiche; it’s an amazingly mature thing for one so young.

There are various fine readings of this great symphony, but the 1987 recording by Bernard Haitink with the London Philharmonic is surely the finest. Muscular and commanding, with a power that lets the majesty of the music flood out, it still never descends into bombast. The London Philharmonic is on sparkling form, displaying wonderful rhythmic deftness and musical fleetness of foot. It romps along yet shows satisfying subtlety, deftly capturing the spirit of this memorable composition. With a hint of pathos, there’s the sense of London as a great city that knew it was no longer the centre of the world anymore.

Dutch born Haitink has a special affinity for Vaughn Williams, one that locks in the music’s beauty, as well as its ability to conjure a wide range of moods in a short space of time. This version is further augmented by its pristine technical quality; a relatively early digital recording, it nevertheless has a flawlessness to it that suits the performance. The EMI balance is supremely natural and the orchestra sits in perfect perspective, just as you would hear it live. The original 1913 version under Richard Hickox and The London Symphony Orchestra (Chandos 9902) is excellent, but Haitink’s account (EMI CDC 749394 2) is better still.