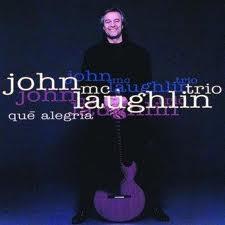 I have been a huge fan of McLaughlin since he blew me away with the Mahavishnu Orchestra back in the nineteen seventies. I see his long and distinguished career divided into different stages as he has moved through all sorts of influences and formed many different groups of musicians into bands along the way. He is an astonishing guitar player with the ability to play things that are so mind-bogglingly complex and physically demanding that I place him in a category all by himself. There is literally no-one like him.

In 1991 he released Que Alegria, a beautiful piece of work with deep, complex passages of intensity offset by those moments of elegant beauty that he has always specialised in. The musicianship is quite simply incredible and incorporates influences from South America to India.

This is one of those CDs that has been completely liberated by the Vivaldi. Gone is the digital glare and thin balance, as McLaughlin’s light-touch production is allowed so much fuller expression and power through the dCS. His recording of the percussion, so magnificently played by Trilok Gurtu, is a particular triumph and only goes to show, once again, the gems that are laying in those discs that might have slipped to the bottom of the pile. For me rediscovering it has been a total joy.