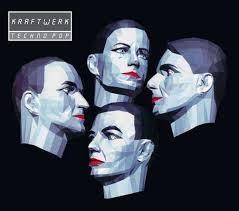 It’s hard to describe just how desperate Kraftwerk aficionados were getting by the time that Electric Café finally arrived in 1986. The band’s previous studio recording – the Tour de France EP – had come out three years earlier, and by Kraftwerk’s traditionally prolific standards, this was already an age.

Its working title was Techno Pop, but until 2009 fans knew this album as Electric Café – a long playing record that came out in both English and German language versions, as well as a limited edition Spanish language imprint. As with all Kraftwerk releases, the original German version always sounds best; not just in the way the timbre of the language matches the music, but sonically too.

Texturally and rhythmically more complex and layered than previous Kraftwerk releases, some critics considered it a high watermark – not just for Messrs Hutter, Schneider, Bartos and Flur, but for electronic music in general. Still recognisably Kraftwerk, here was an album of pristine perfection. Painstakingly recorded, it had a glass-like translucency and sounded cleaner than any previous Kraftwerk release.

Although recorded on analogue master tape, it was made almost entirely with state-of-the-art digital synthesisers. Some British and US pop-rock acts of the day were using Roland D50s or Yamaha DX7s – but they sounded nothing like the dramatic soundscapes that Kraftwerk built into Electric Café with similar technology. Recorded in Dusseldorf with an Emu Emulator II sampler and various digital effects processors, then edited together with geometric precision, it felt like you were listening to the sound of tomorrow, today.

Electric Café took Kraftwerk to new heights of innovation, some of which seem run-of-the-mill now but were novel in 1986. For example, it used powerful breakbeats which soon after began to appear in Rap music. We also hear repeated spoken phrases used as percussive devices, a trick that House music took up several years later. The first part of the album is one long instrumental, each of the three songs blending into the next. Then the music returns to the more conventional Pop form of three separate songs including the single The Telephone Call. Lyrically, the album hints at the complexities of mid-nineteen eighties European life, but in typical Kraftwerk style you’re soon aware that the words are there to complement the music, not usurp it.

This album contains some of the band’s best work, but despite this it’s not the natural ‘go to’ choice for a Kraftwerk album – for these you should seek out Man Machine (1978) or Computer World (1981). Instead, you might say it’s a little more disjointed and less coherent than other Kraftwerk albums.

Remastered in 2009, Electric Café reverted to its original title so is now called Techno Pop. Arguments rage about the best sounding version, but the original 1986 Japanese CD pressing (EMI TOCP-50580) is staggeringly impressive by the standards of that or any other year. As well as being sublimely recorded, the album still feels strikingly futuristic, rather in the way that Kubrick’s 2001: A Space Odyssey motion picture has never dated. Whether you’re a fan of epic electronic soundscapes or just want something to make your system sound good, don’t miss this.