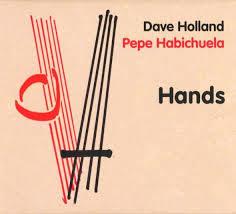 Sometimes when musical cultures come together, the results can be filed under the heading, “well, it seemed like a good idea at the time”. When two musicians of this quality and sensitivity hook up however, the admiration and artistry between them bursts out of the speakers. Holland is a highly respected string bass player who has spent most of his career in the Jazz field, while Habichuela is a hardcore flamenco guitarist from Spanish gypsy stock who positively shouts that tradition with every shuddering rasgueado he plays. The collaboration on Hands is a total success because of the shared attitudes of musical excellence as much as any cultural amalgamation.

Holland is a lyrical and textural player who is more than content to lay off the beat, while Pepe does extraordinary things on the flamenco guitar. Things that make you wonder at not only his incredible technique but also his ‘feel’ for the instrument and that glorious sense of timing that is so very elusive to really understand if you are a non-Spanish student of the art.
Dave moves toward Pepe throughout and lays down a rich textural carpet of low frequency frameworks that Habichuela injects with such vibrant noteplay and Spanish flavourings that the whole recipe is delicious, pungent and ripe with the colours and tastes of Spain.

The dCS Vivaldi brings all its power and might to this album, and opens it up by allowing both instruments their own space and dynamic freedom. Holland’s bass is always focused and full of body and resonating richness, yet never grows vague or overblown. Pepe’s guitar just sounds like the very light and ultra-responsive instrument it is, being so fast and sensationally percussive. Listen to the way he changes its tonal character by where he strikes the string and how he caresses such a striking warm tone with those marvellous, great hands of his.

Holland’s phrasing is beyond exquisite and he can suggest so much with what seems like a simple three-note statement.  With the Vivaldi’s super-fine attention to dynamic detail, you really get an insight into the physicality involved in flamenco and the relentless rhythmic drive involved. Yet it’s the way that incredible resolution merges with such a detailed view of the beautiful and unique rhythms that really sing out and make the album so much more than two quite brilliant virtuosos showing you their chops.

Hands is a significant album in so many ways. Let it absorb you and hopefully you will want to investigate the world of gypsy flamenco even more. The Vivaldi opens the door and lets you do the rest…