Music / Album of the Month / Guns N’Roses – Appetite for Destruction 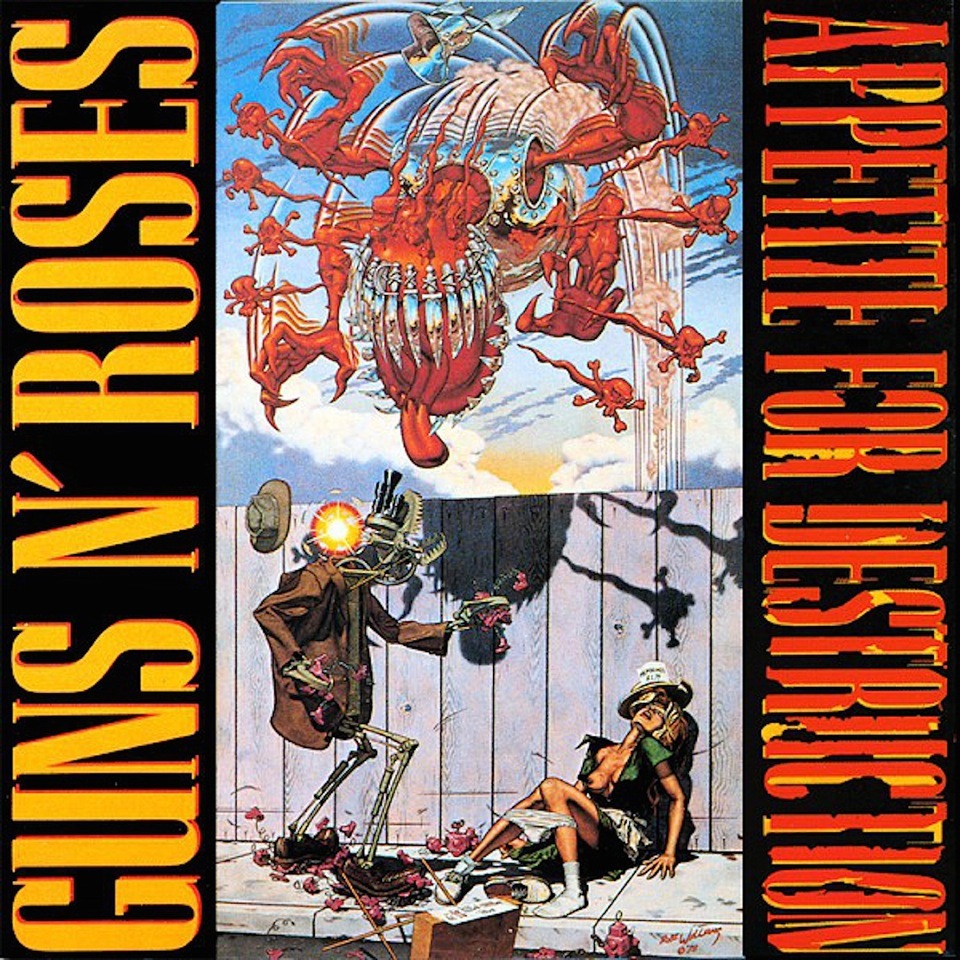 Nobody’s really quite sure when the term ‘heavy metal’ was coined for music. Some say it was that line from Steppenwolf’s Born to be Wild, others think it came from Hawkwind. What everyone agrees on however, is that no one expected 1987 to be a vintage year for the genre. Indeed, by the mid eighties, things had taken a distinct term for the worse – there had been a real buzz just a few years earlier, with the likes of Saxon, Whitesnake and Rainbow propelling huge crashing tunes into the pop charts, but by the latter part of the decade many people seemed more interested in the emerging ‘house music’ movement. Then, a band that nobody had ever heard of before came out of California with a fresh, modern heavy rock record, infused with melodies catchy enough to be chart-topping pop…

Guns N’Roses released Appetite for Destruction on July 21, 1987. It was like a bolt from the blue, going on to sell thirty million copies worldwide, despite getting a lukewarm reception from critics who saw it as formulaic. Since then however, the band’s huge global success has forced many to re-evaluate it. Although not ground breaking in any way, there’s no denying that this great rock album hit the music charts with the force of a speeding freight train. Its singles (It’s So Easy, Sweet Child o’ Mine, Paradise City and Nightrain) were all very strong, the second and third releases becoming massive hits. Despite using a relatively obscure producer (Mike Clink) and being on an unfashionable label (Geffen), the band sounded like a supergroup that had been playing for decades, and at the top of its game.

Guns N’Roses comprised W. Axl Rose (lead vocals, synthesiser, percussion), Slash (lead guitar, rhythm guitar, acoustic guitar, slide guitar, talkbox), Izzy Stradlin (rhythm guitar, lead guitar, backing vocals, percussion), Duff “Rose” McKagan (bass, backing vocals) and Steven Adler (drums, percussion, backing vocals). All were too young to have heard the classic Steppenwolf track at the time of its original release, yet played like they were steeped in heavy metal folklore from the beginning of time. Many of the songs had been well campaigned on the Los Angeles club circuit that the band had made their home. This gave the album a remarkably mature and sophisticated feel, considering that Axel Rose was just twenty five years old when his band hit megastardom.

Recorded at several studios around LA, this is a powerful and coherent sounding album that showcases the musicians’ obvious talents and makes a great statement of intent. The guys seemed to capture the sound of Led Zeppelin of fifteen years earlier, strip it back down to basics and then add their very own magic. Although derivative and in no way avant garde, the quality of the writing, playing and production on Appetite for Destruction is still so strong that it never needed to break new ground. After hearing this, a new generation of hard rock fans was born. For those seeking out their very own copy of this seminal ‘modern classic’ rock album, the original Japanese Compact Disc pressing (Geffen Records 32XD-821) sounds the best, with power aplenty.