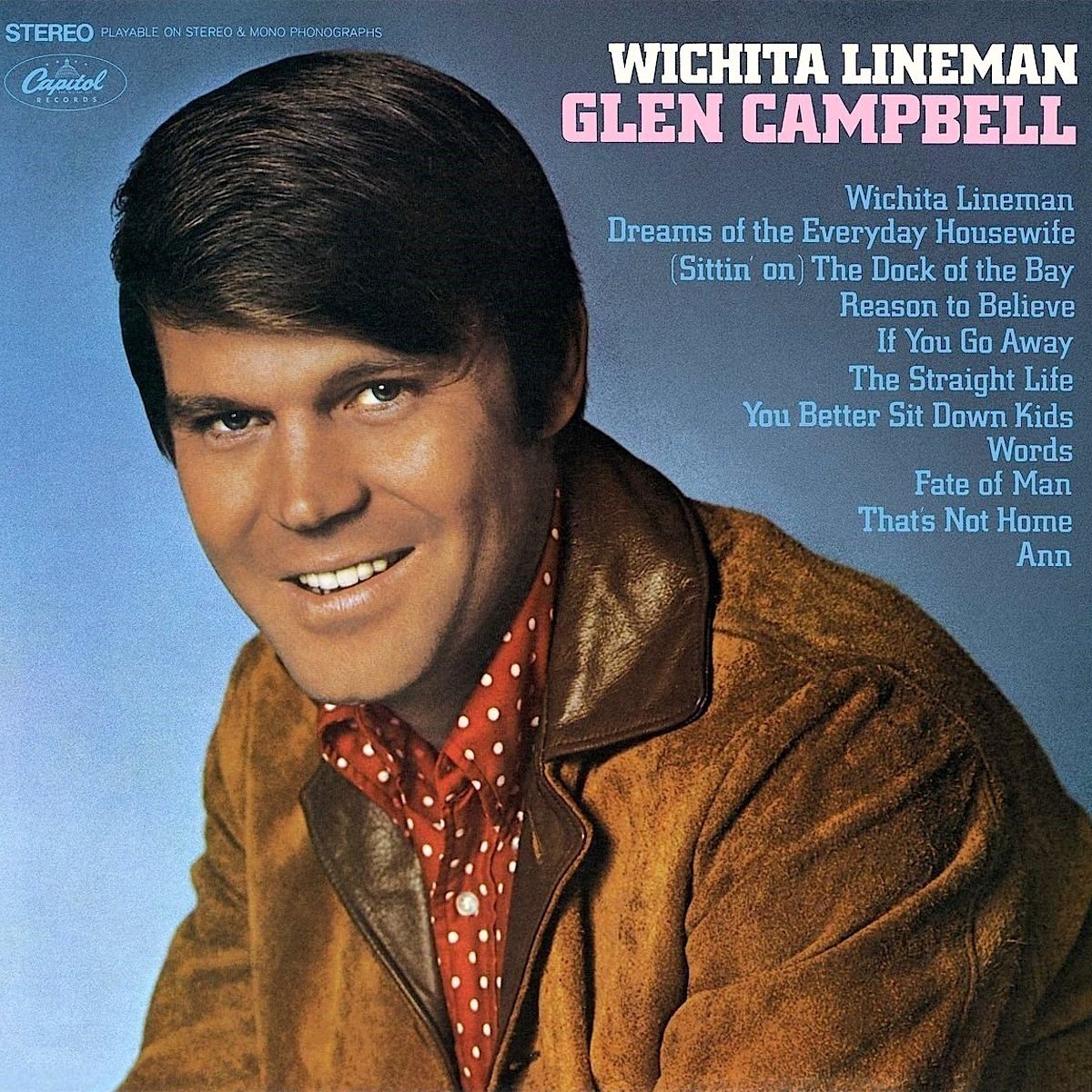 Switch on a transistor radio back in the nineteen seventies, tune into any pop station, and alongside the sounds of Carol King and Rod Stewart, Glen Travis Campbell’s hits such as Gentle on My Mind (1967), By the Time I Get to Phoenix (1967), Galveston (1969) and Rhinestone Cowboy (1975) would ring out. By this time, he was star with ten Grammy awards under his belt. Upon his death last year, he had released seventy albums and sold nearly fifty million records, including twelve gold albums, four platinums and one double-platinum. Not bad for a boy from Arkansas who began his professional career as a Los Angeles session musician thanks to a chain of events starting when his uncle Boo bought him a five dollar guitar, back when he was just four years old.

Things really began to take off for Campbell in December 1964, when he became a touring member of the Beach Boys, filling in for Brian Wilson playing bass guitar and singing falsetto harmonies. Yet it took another three years for him to reach his creative height with the album Wichita Lineman. Recorded in 1968 with his backing band the Wrecking Crew, the single of the same name achieved only modest chart success, but has now become what many think is one of the greatest pop songs ever recorded. Written by Jimmy Webb – of MacArthur Park fame – Campbell’s treatment of it is sublime, with a deep, empathetic quality that reduces many people to tears. It ushers the listener into the solitary, lovesick life of a county workman. The story goes that while driving through Washita County, Oklahoma, Webb saw a lineman and, “put himself atop that telephone pole and put that phone in his hand.” Campbell later said that it alluded to Webb’s first love affair with a woman, who later married someone else.

Released on November 4th, 1968, the album featured Campbell (vocals, acoustic and electric guitars), Al Casey (acoustic guitar), Carol Kaye (bass guitar), Jim Gordon (drums) and Dennis McCarthy (piano). Al De Lory produced and wrote the beautiful orchestral arrangements. Wichita Lineman has its own highly distinctive sound, thanks in no small part to Carol Kaye’s bass guitar playing – she also guested on Phil Spector, Brian Wilson and Simon and Garfunkel hits, and gives things a wonderfully fluid feel. As well as its iconic title track, the record sports excellent cover versions of standards from a variety of artists, including Otis Redding’s (Sittin’ On) The Dock of the Bay, Jacques Brel’s If You Go Away and The Bee Gees’ Words. In truth, the album sounds a little disjointed, but the quality of the singing and musicianship is first rate. Had it not been blessed with a stellar title track, the other songs’ quality would have been more evident.

Thanks to Al De Lory’s genius and the class of the Hollywood-based Capitol Recording Studio, Wichita Lineman sounds spectacular – way better than most rock recordings of that period. Even the standard issue Compact Disc remaster (Capitol Records 7243-5-35229-2-6) from 2001 is blissfully rich, vibrant and expansive sounding, especially when played through a dCS digital front end.