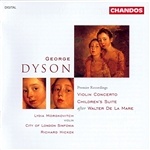 Overlooked or neglected, somehow the music of English composer George Dyson (1883 – 1964) has never attained the exposure or popularity of many of his contemporaries. While some of his choral works might have had a slightly higher profile, his orchestral music remained for the most part unrecorded until Chandos released four discs of his work in the mid nineties.

Quintessentially English, and harking back to an earlier age of romanticism,  the Violin Concerto is perhaps the most ‘fully formed’ of his compositions. It seems to combine the lyrical quality of say Rimsky Korsakov’s ‘Scheherazade’ with the ethereal landscape of Vaughn Williams Tallis Fantasia, and the result is both evocative and haunting. As a piece it might be criticised for not having the ‘robust’ quality of the Dvorak or Elgar Violin Concertos, or being a little too ‘syrupy’ and harmonically sweet, but there is enough drama throughout the unusual number of four movements to counteract this.

Played by the City of London Sinfonia under the direction of Richard Hickox (who had a particular fondness of British composers) together with soloist Lydia Mordkovitch, the performance is both sensitive and confident, and conveys the essence of the music beautifully.

The recording quality is good, but not one that you would single out as ‘audiophile’. But then one of the greatest pleasures I have had listening through the Puccini (together with clock) is its ability to disassociate the quality of the recording from the music. Previously I had thought this disc sounded a little muddy and earthbound with a slightly congested quality. The dCS system somehow overrides this, I can hear greater expression from the orchestra which allows the music to connect more emotionally with the listener, which for me is what this music is about.