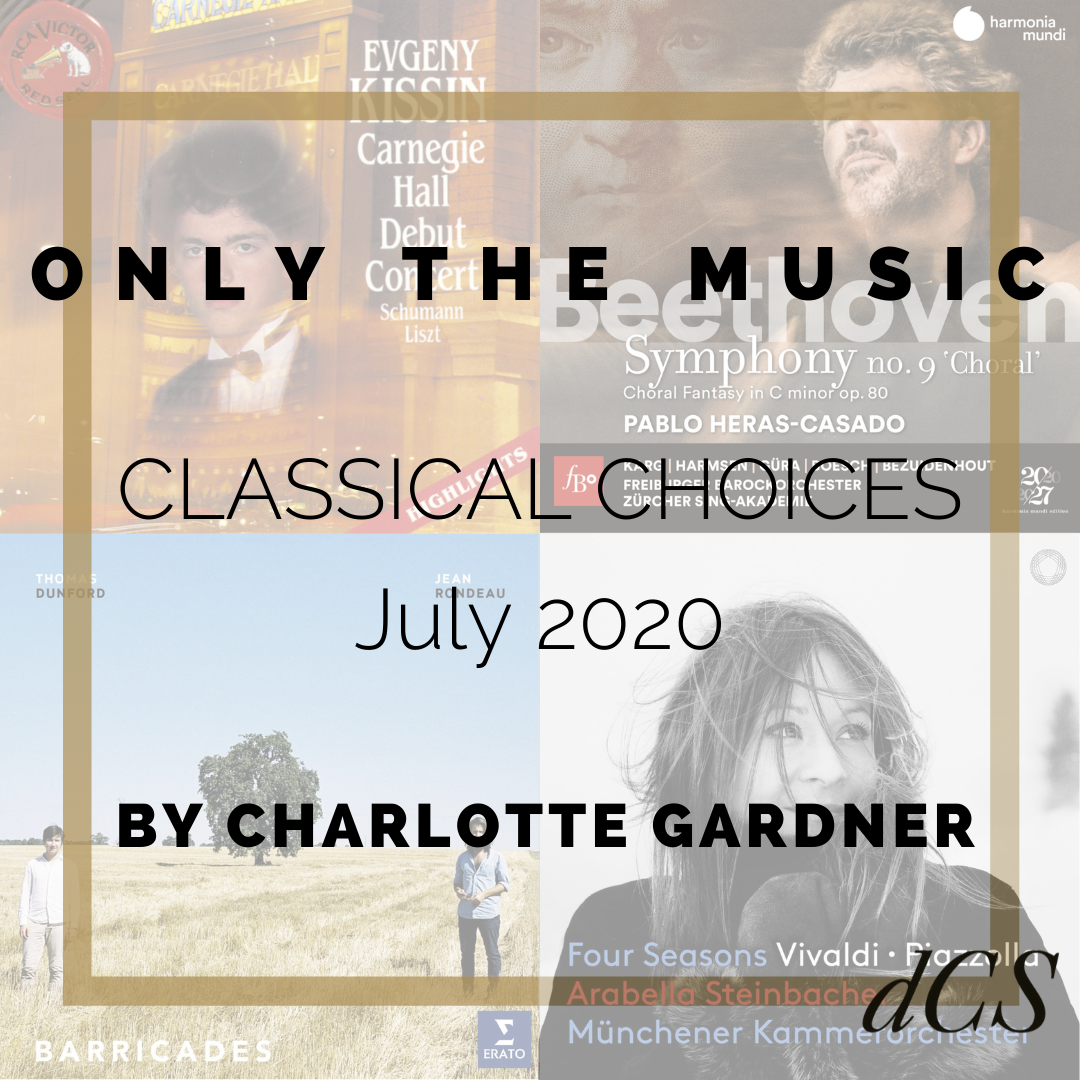 This month’s Only the Music lands the day before the inaugural evening of the Verbier Virtual Festival, an ambitious online event being streamed every evening on medici.tv from tomorrow till August 3rd in replacement of the Festival’s Covid-cancelled 2020 live edition, and which I’m having the pleasure of co-hosting alongside the Swedish Radio Symphony Orchestra’s Head of Artistic Planning and former Verbier Academy Director, Christian Thompson.

It’s a wonderfully rich offering, too: five hours of free-to-view broadcasting every night, comprised of exclusive new performances and interviews from some of the Festival’s biggest stars that have been recorded especially for the VVF, complemented by archive footage of concerts and masterclasses from previous editions. The majority of these evenings will focus on a single artist or group of artists who has become part of the Verbier Festival’s DNA, while others showcase the Festival’s Academy. 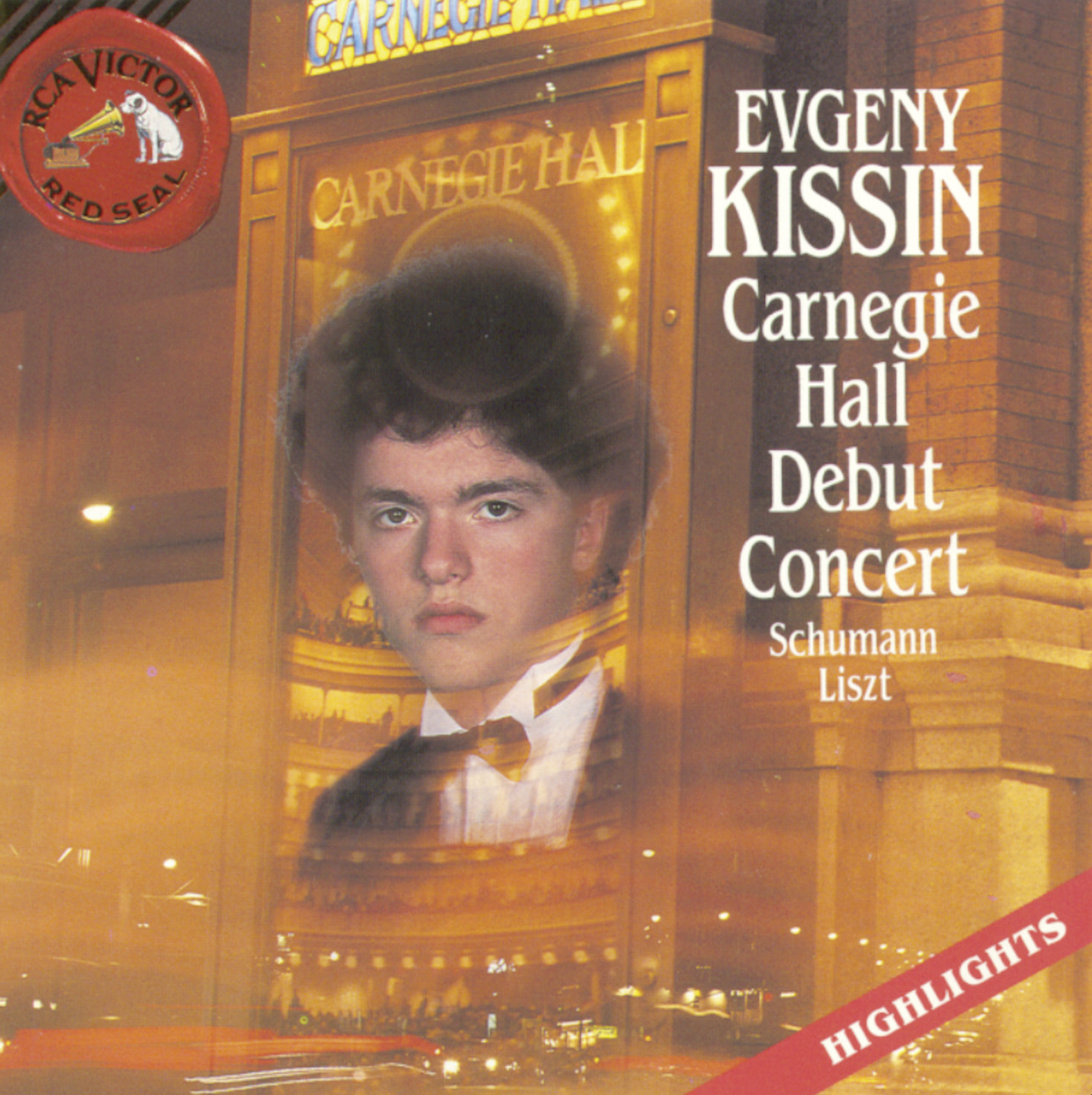 Friday 17th is centred around Russian pianist Evgeny Kissin, who has performed at 23 of the Festival’s 26 previous editions. So to get you in the mood I’m opening Only the Music’s playlist with Kissin’s live RCA recording of Liszt’s piano transcription of Schumann’s song, Widmung, captured at his triumphant Carnegie Hall debut in September 1990, just days before his nineteenth birthday – an album which had Gramophone’s critic proclaiming, “The quality of his playing is outstanding, confirming that here we have no mere Wunderkind but an established artist of the first order”.

The new releases then open with a recording collaboration between two of the Baroque world’s brightest younger generation stars, harpsichordist Jean Rondeau and lutenist Thomas Dunford. Next up is Vivaldi from violinist Arabella Steinbacher, before a fireworksy climax in the form of yet another Beethoven Year dazzler of a release, Pablo Heras-Casado directing the Freiburger Barockorchester in the Symphony No 9, and the Choral Fantasy featuring pianist Kristian Bezuidenhout. 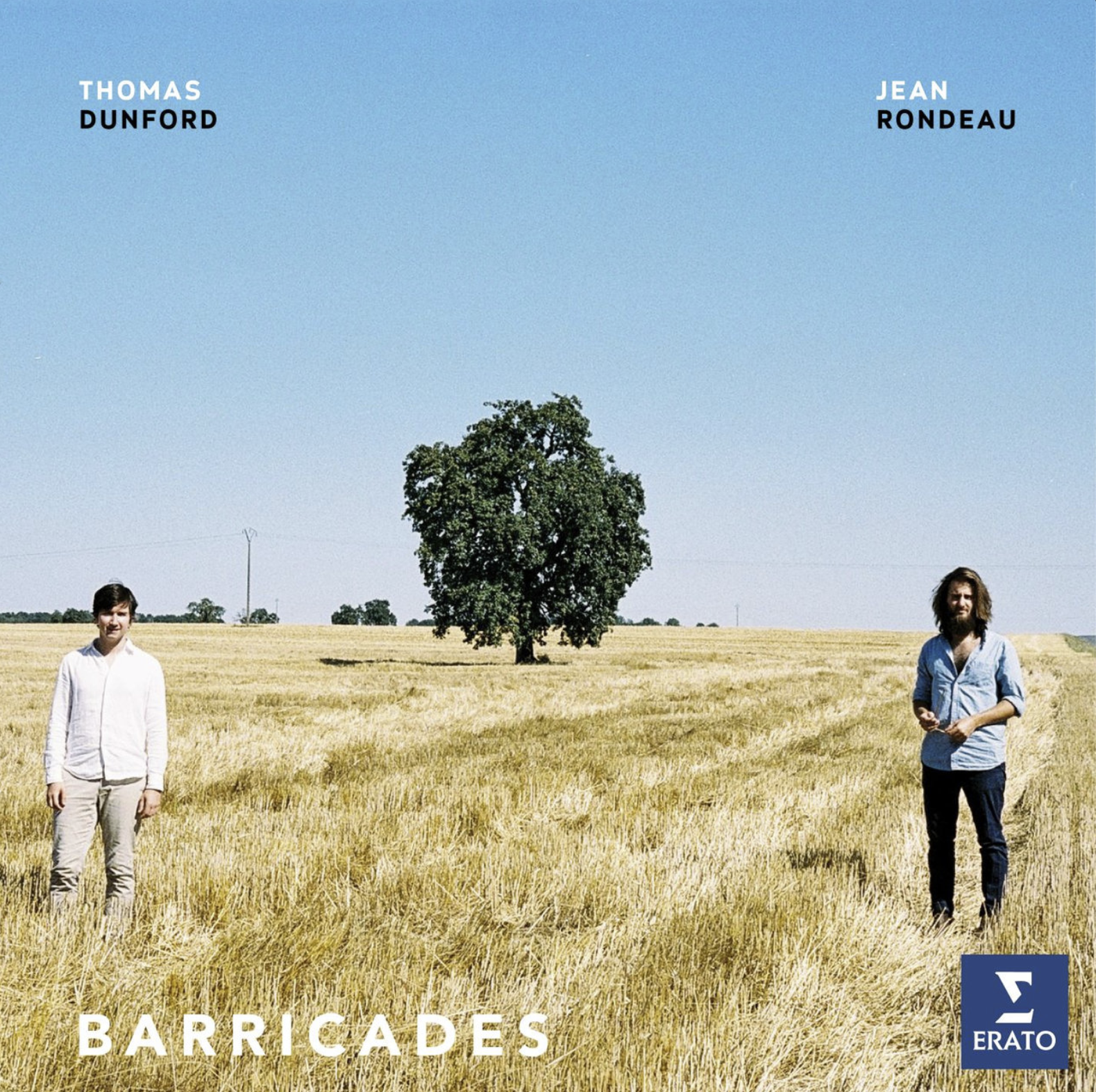 While harpsichordist Jean Rondeau and lutenist Thomas Dunford are longstanding friends and collaborators (not least in recent times via Dunford’s Baroque band, Ensemble Jupiter), Barricades is the first time they’ve recorded together as a duo; and the fact that they’ve now done so, and with the music both have known effectively since the cradle, is good news for all of us.

Named after the enigmatically-titled opening piece by François Couperin, “Les Baricades Mïstérieuses”, the album’s running theme is one of repetition, presented via a programme of 17th and 18th century French music comprised almost entirely of rondos (refrain-verse-refrain-verse) and pieces with repeats in binary form 17th. That said, its raison d’être feels less to do with taking the listener along a structural form-shaped musicological journey, and more about weaving a dreamlike atmosphere inspired by the mysteries inherent in musical meaning, expression and collaboration. So first, sleeve notes that bypass all talk of the repertoire’s historical background in favour of a mission statement to the tune of the above (poetically-worded almost to the point of further enigmatism, in fact!). Then, that aforementioned rippling and swaying Couperin, famous for its supreme balancing of constant repetition with constant colouristic reinvention, and also for the abiding mystery as to what the barricades of its title actually were. Onwards, and the album is equally a dream in every sense. The harpsichord and archlute are a combination to die for on any day, for the way their respective plucked tones both dovetail and contrast with each other, but with the chemistry between this particular pair of musicians, it really is an uninterrupted tale of tightly-knitted musical lines and minds, to which guest appearances from mezzo Lea Desandre, baritone Marc Mauillon and gambist Myriam Rignol add further pleasure. I’ve given you the album’s first two works – “Les Barricades Misterieuses” followed by Robert de Visée’s Suite in D minor – but when conceptually this is an album which rewards listening from start to finish, I hope you’ll then feel inspired to do exactly that by yourselves. 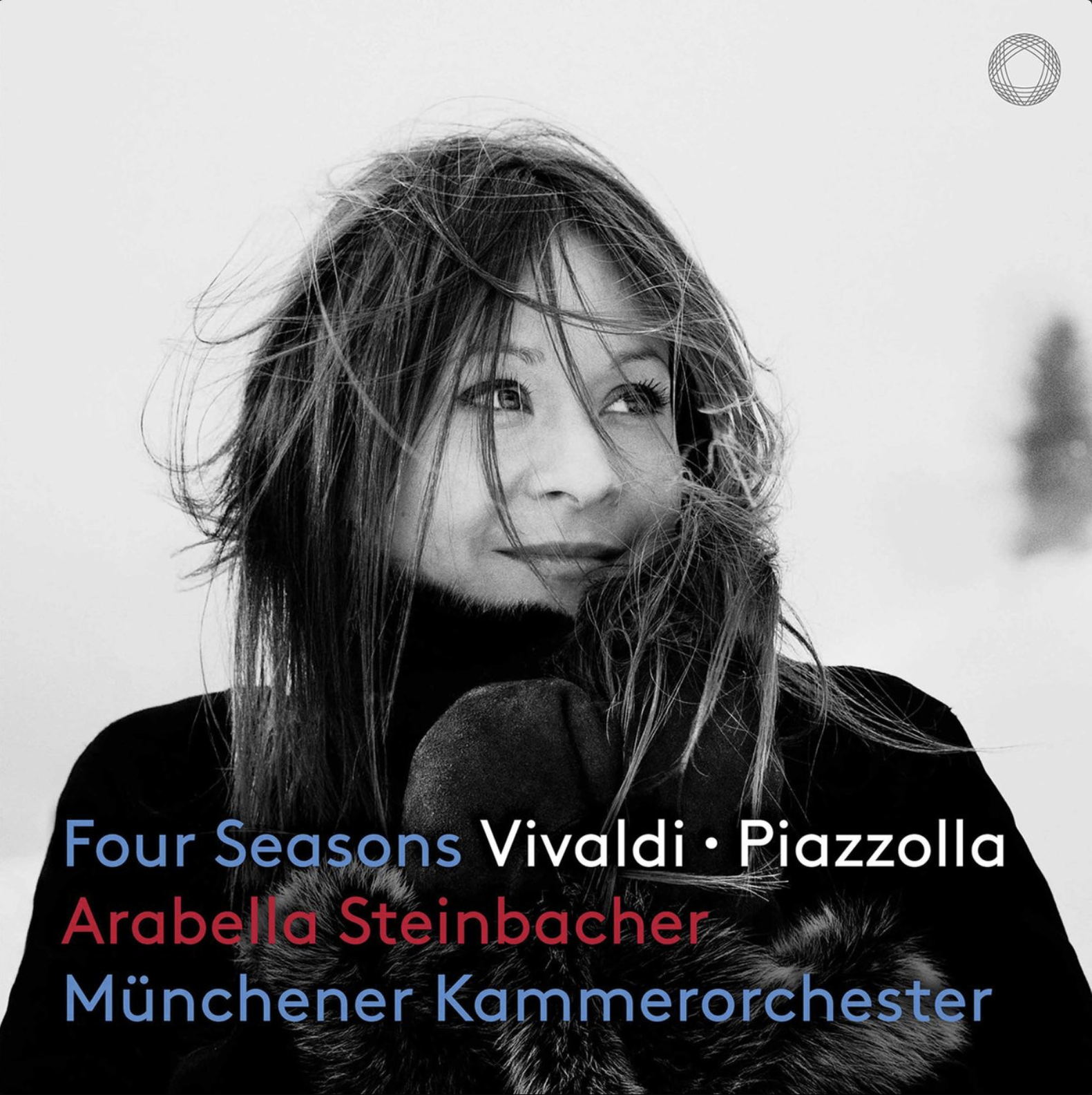 Arabella Steinbacher isn’t the first to think of pairing Vivaldi’s Four Seasons with Astor Piazzolla’s Four Seasons of Buenos Aires. Or indeed of splitting up the four Piazzolla pieces to sit as punctuations between the four Vivaldi concertos – most notably Gidon Kremer did two decades ago with Kremerata Baltica, and just last year Andrés Gabetta brought out a striking baroque instruments reading with Cappella Gabetta. However there’s no question that Steinbacher and the Münchener Kammerorchester have brought their very worthy individual spin to the concept, and not simply because unlike that pair of predecessors they’ve opened each season not with the Vivaldi but instead with the Piazzolla. Sticking with comparisons and taking the Vivaldi first, from Steinbacher and the orchestra we have steady tempi, plus a relatively silky, legato approach to articulation, all of which yields a gracefully floating quality to its delicacy, and thus offers a distinctive alternative to the briskier, airy bounce of the other two. Another defining characteristic of the Steinbacher is its continuo section, the harpsichord sitting far more prominently in the balance than with Kremer, but without the addition of theorbo served up by Gabetta. There’s then a similar degree of grace and unhurried control characterising the Piazzolla, which appears in a new arrangement for violin and string orchestra by Peter von Wienhardt. Across both sets of repertoire, Steinbacher herself serves up soft-toned, lyrical, unassuming yet commanding performances, full of finesse in their dramatic and colouristic details, and with a palpable chamber dynamic with the orchestra. All in all, therefore, this a thoroughly worthwhile contribution to the Four Seasons pile.

This latest excursion into the Classical era from the period-instrument Freiburg Baroque Orchestra in honour of Beethoven 250 reunites them with conductor Pablo Heras-Casado and fortepianist Kristian Bezuidenhout, after last year’s recording of Mendelssohn’s Symphony No 1 and Piano Concerto No 2. It’s magnificent stuff, all of it, but while its headline work is Beethoven’s “Choral” Symphony No 9, what’s got me especially excited is the work they’ve partnered it with – the Choral Fantasy Beethoven composed sixteen years earlier in 1808, which ended up feeding the Ninth in both conceptual terms and in actual material (or, as Bezuidenhout himself puts it, it’s “the Ninth with training wheels”). Entirely novel for its time, this Fantasy opens with a long, grand solo piano introduction, before the entrance of the orchestra provides the segue into a theme and variations on a simple folk-like theme, interspersed by other material, into which vocal soloists followed by a grand chorus eventually arrive for a whopping-forces fireworks show of a conclusion. I always think that this piece doesn’t get nearly the amount of airplay that it deserves, and to say that it’s now found some stellar champions in Bezuidenhout, Casado and the FBO is an understatement. Aside from the combination of playfulness and sheer joyous pizazz and bang they’ve brought to it all (and at a tempo which is fully on the virtuosic end of the speedometer when the orchestra kicks in), Bezuidenhout’s reading has all the freshness of a new improvisation, complete with his own embellishments; which is appropriate, because Beethoven actually did extemporise the piano solo at the premiere, because he hadn’t left himself enough time to write something down before the performance! With all this in mind, it’s the Fantasy I’ve put on this playlist, but I should also make clear that their reading of the symphony is equally phenomenal.