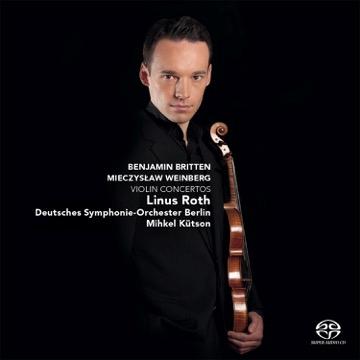 Let me start by declaring an interest; I regard Benjamin Britten as the greatest composer of the 20th Century bar none and his Violin and Piano Concertos as among his greatest achievements.

The Violin Concerto, written in 1939, is a comparatively early work and various commentators have claimed that it was heavily influenced by his growing love for his lifelong partner Peter Pears and/or his visit to Civil War ravaged Spain a few years earlier. Britten would probably have said it was just about ‘music’ and he described it simply as ‘rather serious’. Many reviewers regard it as emotionless; I disagree. Whatever, it is a highly original piece of music that merits those now much overused and abused terms ‘creative’ and ‘innovative’.

One of the joys of great music is that it is open to different interpretations and this Violin Concerto is no exception. On record these fall into two broad categories – somewhat angst-ridden (and this includes the 1971 Mark Lubotsky version with backing from Britten’s own English Chamber Orchestra conducted by the composer) and lyrical – and that includes this version.

Roth adds more vibrato than Lubotsky and takes nearly a minute longer to play the first movement. However, unlike some of the slower and more lyrical interpreters, Roth makes this work well by adding an element of greater emotionality to the music. The fearsomely difficult second movement Roth takes in his stride playing it slightly faster than Lubotsky but, happily, not in any way sacrificing any of the menace that is inherent in the music. The movement ends with a highly original (and very difficult) cadenza (again supremely managed by Roth) that leads straight into the long, final movement. Written by Britten as a passacaglia, the orchestra and soloist play constantly changing variations over a set ground bass that is passed around the orchestra. To make this work well is difficult but Roth is more than up to it, once again interpreting it in a more lyrical style than Lubotsky and taking nearly an extra minute and a half to complete it. However, nowhere is the difference in interpretation more evident than in the final bars that Lubotsky treats as anguished howls whereas Roth plays them more as impassioned sighs.

Clearly I love the Lubotsky version. So can I live with Roth’s version? Most certainly because it has given me a fresh insight into a piece of music that I thought I knew really well. By any standards this is a wonderful recording and I loved it!

Oh…and by the way, the recording quality is also fabulous. Our reference Vivaldi system was ‘on the road gigging’ when I wrote this review so I heard the recording as a stereo DSD64 download on my Paganini based system and it was indisputably demonstration class. The soundstage was both broad and deep, instruments were clearly etched within this soundstage and all sounded totally lifelike. I was particularly impressed by the deep and rich bass drums (of which there are many) and the perfectly burbling brass. The same is true for the excellent and rarely heard Weinberg Violin Concerto that comes as part of this album.