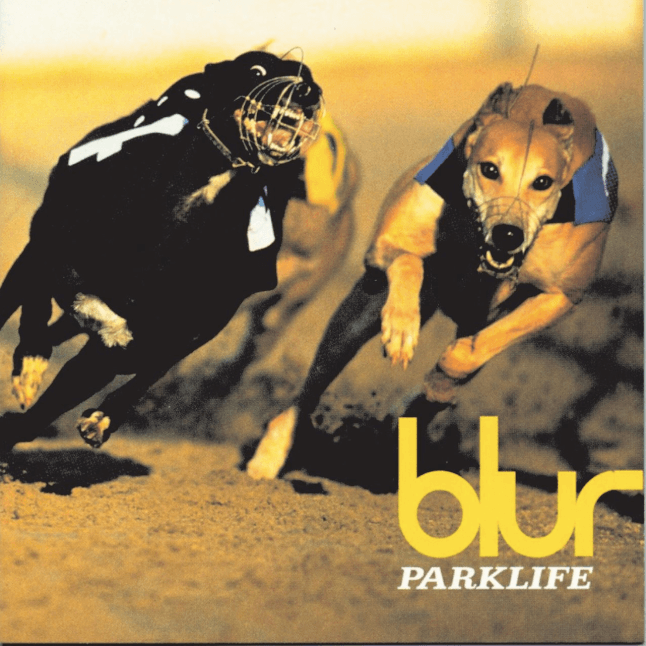 Pop music is here today and gone tomorrow – which is why it so powerfully embodies its time. Twenty five years after Parklife was released, Blur’s third album does precisely this – it’s a musical time capsule that whisks the listener back to British cultural life, circa 1994. Although not quite a top tier album in the great scheme of musical things, it’s still an interesting and enjoyable fifty minutes that shows this fine Britpop band at its creative height.

Blur’s lead singer and songwriter Damon Albarn was a fan of the The Kinks, and there’s more than just a hint of them running through Parklife – yet there is more to it than that. Blur started life in London in 1988 as a rather fey student band, with guitarist/singer Graham Coxon, bassist Alex James and drummer Dave Rowntree joining lead singer Albarn. Leisure (1991) was their first album, a weak thing helped along by uptempo ‘indie dance’ numbers like There’s No Other Way. Modern Life Is Rubbish (1993) saw Blur really finding their feet, with a classic pop sensibility reminiscent of The Beatles, T Rex and XTC. By the time Parklife appeared a year later, the band was on top form – running through British popular music history for inspiration and adding a good deal of their own.

The first single wasn’t particularly representative of the album as a whole; the disco-infused Girls & Boys reached number 5 but was the most throwaway song on the album. The tender ballad To the End showed a more mature and contemplative band, while the plaintive End of a Century was something Ray Davies could have penned himself. However, it was the album’s title track – released in May of that year – that really put Blur on the map. The decision to invite Phil Daniels – star of mod movie Quadrophenia – to guest on vocals was genius. It was a hugely catchy pop tune that went on to epitomise the whole Britpop genre.

Recorded between August 1993 and January 1994 at Maison Rouge Studio, Fulham and RAK Studios, St. John’s Wood, Parklife has aged well. The production by Stephen Street – most famous for his work with The Smiths in the nineteen eighties – is clean and crisp. Although a little compressed, it uses no instruments that were fashionable at that time, so doesn’t sound dated today. The strong melodies, soaring choruses and mixture of late sixties pop sensibility and punky, thrashy guitar could be from any period. Albarn’s lyrics are funny, quirky and sometimes quite profound, without trying too hard. The Japanese CD release [EMI PCD-0476] is the one to have for the best sound quality and packaging.

Parklife was in the right place at the right time, and saw young British musicians begin to pay homage to their cultural past. Perhaps unwittingly, Blur became the scion for the so-called Cool Britannia movement that included everyone from the Spice Girls to Michael Caine. Parklife went on to sell over five million copies worldwide, as Damon Albarn had predicted. Back in 1990 he presciently told some music journalists that, “when our third album comes out, our place as the quintessential English band of the nineties will be assured. I intend to write it in 1994.”