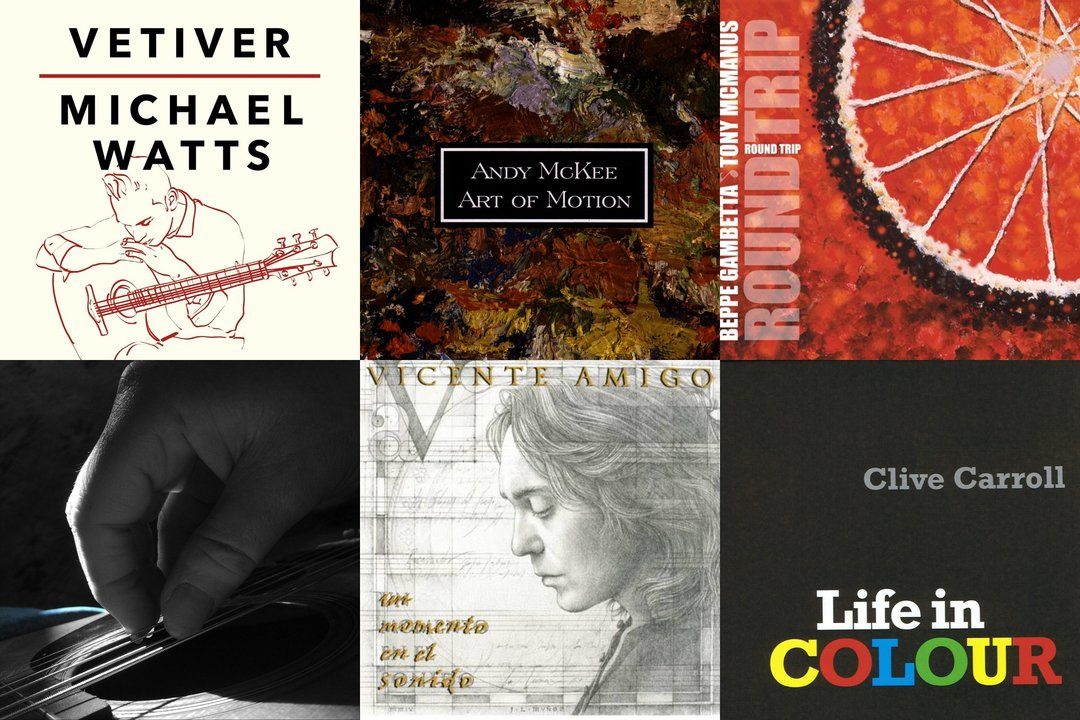 We are living through what has been termed “A golden-age of luthiery” right now.

Some of the best acoustic guitars that have ever been built are finding their way into the hands of players who have been searching for a new voice. Advanced design and astonishingly detailed workmanship have come together to provide instruments of impressive sensitivity and tonal colour for those who have the ability to both understand and exploit them.

Acoustic guitar is, almost by its very nature and unamplified volume potential, an introspective (songwriting) instrument that has found a place in just about every type of music. Solo acoustic guitarists traditionally do not sell enormous amounts of their music and often rely on small intimate gigs .

The music on this list is probably not going to have you leaping around the room, dancing your body into unusual shapes in response to the driving rhythm.   It’s largely a list of tracks to listen to with feet up and eyes closed. I’ve tried to vary the flavours a bit so, if it encourages you to further explore a few avenues, genres or artists you haven’t experienced before, then my work is done. 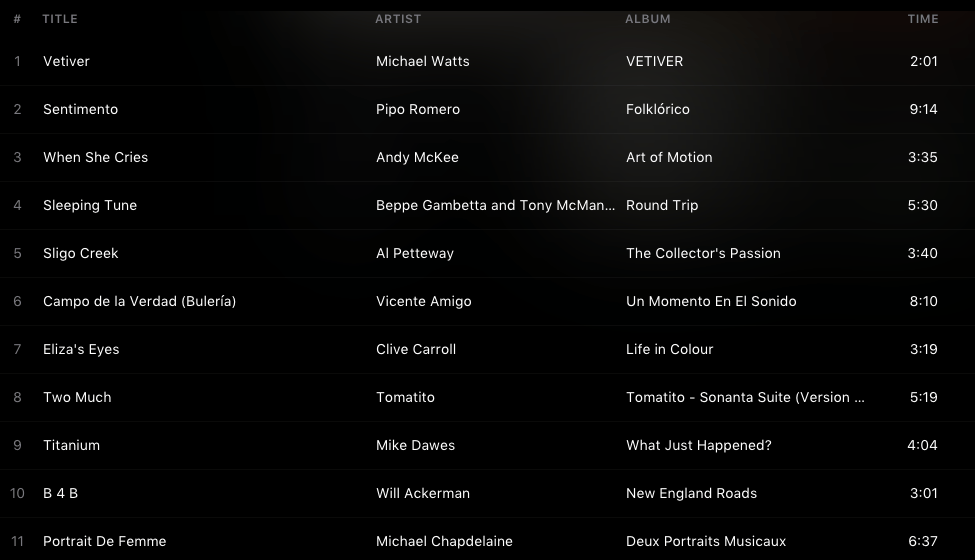 Michael is a fascinating player with real depth. His sensitivity, touch and technical ability are shrouded in a calm tranquility on Vetiver. He never shouts but draws you toward the piece with his lyricism and quiet, precise technique and his music is full of space and atmosphere. He is entirely representative of the new breed of player, armed with a modern instrument of unparalleled potential made for him by high-end builder Jason Kostal in Arizona.

A wonderful coming together of Pipo’s Spanish heritage mingled with a modern approach. He plays steel-strung guitars in a kind of hybrid Flamenco style that is unmistakably Iberian, yet there are modern licks in there too. Again, he has an amazing technique, particularly his right hand which is likely a legacy of his his early days. Both his approach and musical heritage work really well together and I reckon that we will be hearing a lot more from him in the future.

3: Andy McKee,
When She Cries, Art Of Motion.

Very few can do the whole ‘tapping thing’ like Andy. Like all the players here, he has an almost ethereal touch and can set up a whole and complete picture of a tune before your ears. He draws tease shimmering harmonics from guitars in a beautiful way and expands his fantastic chord-work by building new percussive frameworks at the same time. It’s brilliant stuff.

Tony is another player of seemingly unlimited ability and highly respected within the acoustic guitar community. Sleeping Tune is one of those pieces often copied by other guitarists who also specialise in DADGAD tuning. He tours with Beppe quite often and together they are formidable. This is brilliant acoustic playing by a monster of a musician who seems equally at home with traditional tunes, especially Gaelic, or mood pieces. His sense of pace and rhythm are delicious.

Al is an American guitarist who also spans styles. He is just as happy with an arch top electric jazz guitar in his hands as playing Gaelic tunes or Appalachian country on a 1930’s golden-era Martin flat-top.

He often provides a backdrop to films about America’s huge open spaces and national parks and has that rare gift of phrase and taste that speaks of such wonderful places. His work is so varied and his knowledge of the instruments so deep that you can spend ages going through his repertoire, including that with his wife, Amy White.

Where to start with Vicente? Simply one of the best Flamenco players I have ever heard. Actually, make that one of the best musicians. He can rip it up with anyone. I saw him play once in London from the front row and his intensity was frightening. Astonishing speed and a right-hand technique that reaches right into you and speaks of passion and beauty. But while he is all flying hair and flared nostrils one moment, he has an almost angelic beauty to his softer, more melodic playing that can bring a tear to the eye. A force of nature.

Another one of those ‘complete’ players. Seemingly without musical boundaries, Clive is an acoustic guitarist to rival anyone. He’s great to watch and has a well of technical ability coupled with taste and brings it all together with precision and a sense of subtle musicality that is incredibly rare. He may look like a bank clerk but he plays like a God.

Another great Flamenco artist who loves the counterpoint of his guitar against a full orchestral backdrop.   This track finds him in more subdued mood. Josep Pons, the noted Catalan conductor brings out a different side to the uniquely Spanish flavours one usually hears from Tomatito.   On this track it’s not hard to imagine the music as a film score as the arrangements are so sweeping and grand at times.

A very modern guitar player and one who has bought his own rhythm section with him.   Mike seems to find room to to embellish a beautiful and colourful voice with percussive elements all over the body and neck of the instrument. In this short piece he is so incredibly crisp and to the point yet never goes as over the top with the tapping because the tempo is all there, in his right hand. A quite amazing guitarist.

The acoustic guitar has extraordinary potential, in the right hands, to portray wide open spaces, solitude and even and loneliness I think.   Will Ackerman of Windham Hill established himself many years ago as a master of space and tone. His repertoire is extensive but this captures that perfectly. Slow, yearning and very understated. Music to drift away with.

I really wouldn’t know where to start in trying to describe what Michael Chapdelaine is all about. I have watched videos of him playing that defy belief. To be any good on an instrument, you have to have the technical side of things together and a naked acoustic guitar is as demanding as it gets in my book. Michael seems to embrace the impossible by doing about three things at once. He can be fiery but has a sensitivity and an ear for a melody that is uncanny.   Quite simply, he is brilliant and a constant source of amazement (and inspiration) for me and I suspect, many others. He just needs to get more of his music out there.