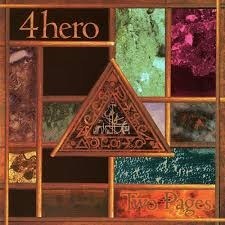 Getting nominated for the Mercury Music Prize is not automatic proof of high artistic merit in popular music – this has after all happened to both The Spice Girls and Simply Red. But it certainly proved helpful to 4hero in 1998, when it put the duo’s third studio album Two Pages well and truly on the map.

4hero’s second album, Parallel Universe (1991), was widely hailed as one of the very best of the genre, and mentioned in the same breath as Goldie, Roni Size and Alex Reece. But despite coming out of London’s late eighties pirate radio dance music scene, Marc Mac and Dego were not happy to keep making the same music forever. They began to experiment with jazz and soul and soon found themselves signed by Giles Peterson’s hugely respected Talkin’ Loud label. The fusion of Rare Groove and Electronica gilded with a sprinkling of Rap ensued, and Two Pages was born.

Two Pages was one of the first so-called Nu Jazz albums, and won great critical acclaim. Across four LP sides or two Compact Discs, it is arrestingly beautiful, mellifluous music with enormous care lavished upon it. Its songs are sweet, tuneful and melodic yet ooze emotion, while the album’s various instrumentals are worthy of the best film scores around. Arrangements are spectacular yet sparse, blending violins, cello, harp, oboe, cor anglais, electric piano and soaring vocal harmonies to superb effect. It’s no exaggeration to say it’s up there with some of the best Stax-era Isaac Hayes.

Lyrically, the album won’t be for everyone. The spiritual themes are nice but have a distinctively nineties ‘new age’ feel which some might find dated. At least they’re positive and thoughtful though, and tie in seamlessly with the beautiful music and virtuoso playing. Even in standard CD form (Talkin’ Loud 558 462-2), it’s one of the finest recordings of the nineteen nineties – getting better with every hi-fi upgrade you make. Gomez won the 1998 Mercury Music Prize with Bring it On – but 4hero’s Two Pages teaches us that the judges got it spectacularly wrong!